HELPING YOU WEATHERPROOF YOUR BIGGEST ASSETS SINCE 1986

What is a Dead Valley on a Roof?

So what is a dead valley? As a follow up on our last post regarding the horrific ice storm and roof ice dams I have this on the number one leak problem we witnessed. The ice dams in general were a problem. More specifically however were the problems with ice dams at roof dead valleys.

A regular roof valley is the point where two opposing roof slopes come together forming a trough where water is facilitated in flowing off of the roof. Such a valley generally bears the same ratio of fall as the overall roof itself. A dead valley by contrast is a point where two or more opposing roof slopes come together but bears almost no fall at all. This means that water and debris will collect in this area, causing roof problems down the line. Dead valleys are usually of two varieties. The first is where a regular valley dead ends into a flat wall corner rather than flowing directly off of the roof. The second is where two or more opposing slopes die into one another. 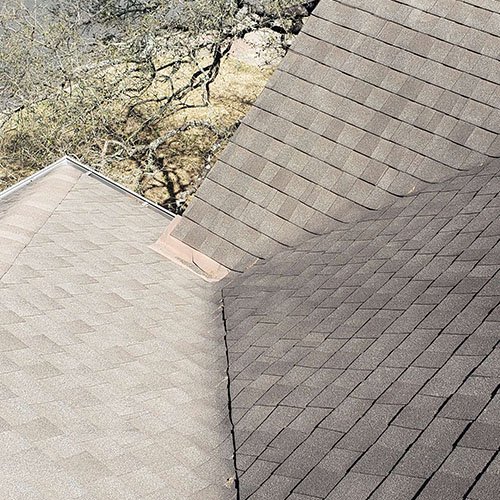 Why is a dead valley a problem for a roof?

In both cases there is little to no slope at that meeting point to promote the water to run off of the roof, allowing water and debris to collect or pool in that area, causing roof leaks and other issues. Therefore in that limited flat area the normal shingle material used on the rest of the roof is not sufficient to prevent leakage. In the first case (dead valley corner) it is customary to install a manufactured soldered metal pan custom fit to that application in order to perfect the seal.

In the second case (dead valley between shingled slopes) it is customary to install a flat roofing type membrane such as TPO or Modified Bitumen in order to create a perfected seal.

As may be obvious in both of these scenarios the water flows off of the roof much more slowly than it does off of the steeper sloped shingled areas. Because of that during a sustained icing event more ice and snow or debris will collect in these areas than in other areas of the roof, leading to more opportunity for leakage. This is in fact exactly what we have seen this week as we have inspected and investigated over a hundred such situations.

How Do you Fix a Dead Valley?

Is there a way to fix a dead valley before it becomes a problem? There are a couple of ways actually.

It may not be possible in all cases to avoid some problems with ice damming, or water and debris collecting on your roof, however if you follow these few basic rules you should be able to avoid the worst of them.

Check out Roofing by Stacy Pearson on Yelp

Leave Us a Review

What Is A Dead Valley On A Roof?

Connect With Us On